About an hour ago, a stressed girl named Lindsay called with a lockout in Manoa. "Can you hurry?" she asked, "We're filming Lost over here."

Eight minutes later, we pulled up a tiny Manoa street loaded with giant trucks, lights, equipment, and swarming with people. This was very cool for me, a total film set noob. More than one guy lifting equipment called out, "Hey! Are you here to help us? Yeah? Oh, I thought you were part of the set!" 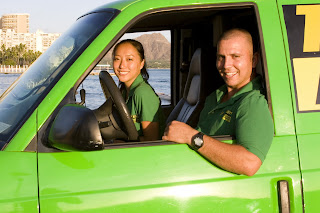 When we finally got to the right address, they told us we couldn't park our flaming green van there because they were filming the house...uh, NOW. "Back up and park behind that truck," said about fifty people. So we backed up. And there was no room for us on the skinny residential street because there was a giant cherry-picker and scaffolding and a giant black cable snaking everywhere from 40 feet up. And everyone was still yelling at us. Okay. Can we park in the driveway? "No! Go forward I said," yelled this haole local guy, "You see dis local guy over hea? He tink he know more than us. Ho da nerve yah?" Yowch. We went further down the street past throngs of people and parked at the end of the cul de sac.

Then a 350 lb, 6'5" security guard interrogated us about what we needed. Then some local guy in boardshorts and a t-shirt came charging up to the van and said, "OkaybrahsoitwaslikethisIdidthisandeeeeerrrrandthisandthis likefourtimesinarowthen Hoooooo da ting wen jam up arready." It turns out that this hyperkid is one of the actors, and he had jammed the deadbolt with cameras rolling, a hundred people watching. If I watched the show I could probably tell you what actor he was...but, sorry, I don't have a TV.

"This is what we're gonna do," said the 350-pound security guard in a sweaty yellow shirt, "In about 3 minutes, as soon as they stop filming, you're gonna run inside the house with him," he pointed at the actor in boardshorts, "And go inside and do what you gotta do." This was a lot of pressure, what with hundreds of people watching and cameras everywhere.

The security guard said, "Ok GO!" The boardshorts actor grabbed Guy and they sped off down the hill and into the house. Literally, they ran. I never see Guy run. While they were inside, they filmed a scene with a haole guy in a suit pounding on the door and trying to get "David" to let him in the house. I found that amusing. The door was really stuck! Ha! 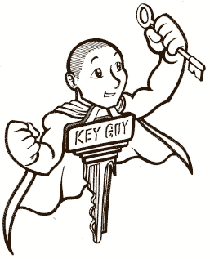 Five minutes later, Guy had unjammed the deadbolt and changed it out for a new one. Luckily, he had just competed in the Speed Deadbolt Installation Contest at the Vegas ALOA Convention. The girl inside with him announced it to everyone on the walkie-talkie.

The door blew open and Guy was standing there. Everyone on the set swarmed to the front door and started screaming and applauding. More people congregated around him. A man shouted, "It's Guy's birthday!" Then all hundred people started singing "Happy Birthday Dear Key Guy." I started laughing. It was pretty ridiculous. Guy, beaming, took a bow and shook hands with the crowd on his way down. Someone said they should take our bill and pay us double. Men slapped him on the back. The director, actors, and other important-looking people congratulated us. A loud voice yelled, "Ey! If you get locked out, CALL THE KEY GUY!"

The man in charge of paying the bill said we'd saved him tens of thousands of dollars by fixing the door. It felt pretty sweet. 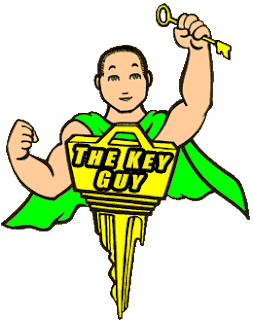 If you ever thought a locksmith could save the day (and dare I say be a superhero?), this is the time and place it happened. Guy said we should ask for an acknowledgement in the episode credits. I said, fancy that.
Posted by Kimberly Loo at 8:22 PM

About The Key Guy

The Key Guy has a Master Locksmith on call 24 hours a day, 7 days a week. Call 1-877-7KEYGUY (377-4184 Oahu). As Hawaii’s premier Locksmith Service, we are proud to offer the most reliable, ethical, and affordable locksmithing in Hawaii - just read our testimonials! The Key Guy is kama’aina owned and operated by Certified Master Locksmiths, as well as bonded and insured.

All labor can be done right where you are, instantly. At your service are The Key Guy’s full-service mobile workshops, fully equipped with state-of-the-art machinery. The Key Guy services all types of lock hardware, including locks for vehicles, private homes, condominiums, military and commercial buildings.

We’re fast, too. We arrive on-site within 30 minutes to most Oahu locations.

The Key Guy offers an unparalleled 3-part guarantee to provide the best prices and the best service. Each individual part of our guarantee is unique among locksmiths in Hawaii. Offered ogether, they promise an unbeatable level of quality locksmithing compared to any of our competitors.

1) The Key Guy has the best prices on Oahu. Period. If you find a better price from one of our competitors, we guarantee to beat it. Proof of price must be presented before service is given.

2) Rest assured that if you call The Key Guy, we promise to find a solution for your security problem. Your problem is our problem, and we will not leave until we find a solution. We work hard for our clients, and in return, ask to keep our solid reputation.


3) In order to guarantee the most expert security solutions, The Key Guy employs Certified Master Locksmiths. Master Locksmith is the highest achievable level of locksmith certification.