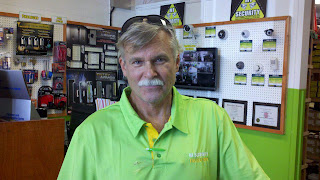 Bret brings over 25 years of  locksmith experience and invaluable knowledge to The Key Guy family team. You'll be seeing him driving The Key Guy's signature green van, and you may also bump into him in our Waimalu shop. Come say hello and welcome Bret!
Posted by Kimberly Loo at 11:28 AM 4 comments:

We're celebrating St. Patrick's Day! Since the dawn of The Key Guy, green has been our color of choice. What better way to celebrate the greenest holiday than giving our customers a few greenbacks?
$100 off installation on our quality selection of HI Security surveillance cameras for your home or business. The Key Guy & HI Security will come to your home or business free of charge to recommend the right security system for you.  No pressure to buy! Valid on quotes given until April 1, 2012.
Call Kaleo for consultation! 626-5464 or email kaleo@securityhi.com 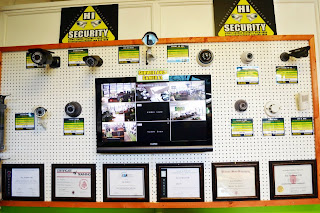 Posted by Kimberly Loo at 11:21 AM No comments:

‎"Would you like your receipt emailed or texted to you?" are the words you'll hear after doing business with The Key Guy from now on. Green has always been The Key Guy's color, we're just finding more ways to prove it!

The Key Guy has been sending all invoices electronically since we first opened our doors in 2008.  We are proud to extend this environmentally friendly practice to another aspect of our business.

In upkeeping The Key Guy's high ethical standards, we will never spam you, nor would we ever even think of selling or sharing your email address with third parties.

Printed receipts will still be available upon request.
Posted by Kimberly Loo at 4:47 PM No comments:

We're a bit behind on the announcement, but The Key Guy's Guy Tordjman is now a certified GSA Inspector and Technician.  GSA containers are primarily used by the Department of Defense to hold classified documents and other sensitive materials.  Guy completed the rigorous 80-hour training course and certification exam at the MBA USA School in Kentucky this September 2011.  Guy has also been inducted as a member of the Safe and Vault Technicians Association (SAVTA) as of November 2011.  He keeps up to date with advances in safe and vault technology to best serve Hawaii's military, government, commercial, and residential safe-owners. Congratulations, Guy!
Posted by Kimberly Loo at 3:32 PM No comments:

The Key Guy will be temporarily closed until further notice.  We apologize for the inconvenience, and thank all our loyal customers.  We hope to reopen our doors (and yours!) as soon as possible, projected to be in 2012. Happy Thanksgiving and best of health to you this holiday season.

Aloha,
Guy and Kimberly
Posted by Kimberly Loo at 10:57 PM No comments:

We are a small, growing, award-winning locksmith company looking to hire for the position of APPRENTICE LOCKSMITH, to be hired as LOCKSMITH TECHNICIAN upon successful completion of a 90-day training period. You will learn how to unlock everything from cars to safes, how to re-key and change locks, and how to perform all aspects of residential, commercial, and automotive locksmithing. You will be based out of our retail showroom in Aiea, providing locksmith service in the shop and mobile locksmith service at customers' locations. This is a challenging and rewarding field with lots to learn, and we hope to give a few lucky people a solid career they can build on for years to come.

HOURS:
Full Time
Must be available 8am - 8pm M-F, and possibly Saturdays half days

REQUIREMENTS:
No locksmith experience necessary. We will train you! (However if you do have experience, please tell us)
Clean Driving Abstract
No Criminal Record. Ability to pass FBI Background Check
Mechanical Intelligence (able to work with tools, both fine manipulation and large manipulation, problem solve)
Ability to lift 40 pounds
Customer Service Skills, both on phone and in person
Ability to work independently, and to get along with everyone in our family-operated business
Fluent in English
Able to perform basic math calculations

COMPENSATION:
Hourly+Commission+Benefits+Overtime+MEDICAL+DENTAL+VISION+CHIROPRACTIC RIDERS for 90-day training period.
After 90 days, we will evaluate your progress and additional compensation. Our current locksmiths are paid hourly + commission + benefits. Current locksmith technicians have made up to $60,000/year with our company in the first year with us. Your compensation will depend on your performance.

TO APPLY:
Email your resume and a paragraph about yourself to Guy at "guy at keyguyhawaii.com"
NO phone calls. Please do not contact us to see if we have received your application. We will contact qualified applicants for interviews. Your ability to follow these instructions will be considered.

More about The Key Guy: http://www.keyguyhi.com
Posted by Kimberly Loo at 5:02 PM 1 comment: 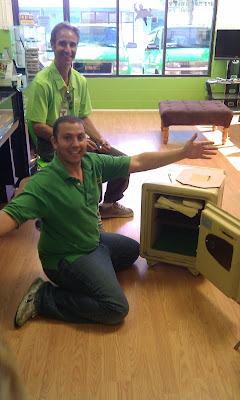 Opening an old safe is exciting stuff! You never know what's going to be inside. Our neighbor Blaine from Superior Sweepers just hauled in this old safe from one of his customers. The Key Guy owner and Master Locksmith Guy Tordjman cracked it in just a few minutes, with Locksmith Technician Gavin Baer assisting. Guy used his aural sonometric technique (otherwise known as listening for the sweet spot!) to find the combination on this safe.
Make an appointment to bring your old safe into our shop in Harbor Center behind Cutter Ford in Waimalu.  Call Guy at 548-1999 even if you lost the keys, broke a key off inside the keyhole, or the combination isn't working. http://keyguyhi.com
Posted by Kimberly Loo at 4:40 PM 1 comment:

Toyota Owners Take Note! What to do when your 1990 -2001 Toyota Ignition Freezes

Answering the phone all day long can be really hard sometimes. As a full time locksmith and call-answering service for the past few years, I've tried to save time and money for my customers and diagnose the problem over the phone.

A "stuck ignition problem is very common among all car manufacturers and in this blog article I would like to concentrate on TOYOTA makes from years 1990 to 2001.

How to be smart when your Toyota ignition freezes

It will probably be just another day when you get into your 2000 Toyota and try to start it, but the key refuses to cooperate and doesn't turn in the ignition cylinder. After trying for half an hour, climbing in and out of the car at least ten times, frustrated, you probably call your mechanic thinking that you'll find the solution to your problem there. Any mechanic or auto shop guy will probably think twice before taking an ignition job, some even call us to do the repair for them and mark the price up on your bill!

When you have car ignition problems you want to call a locksmith--not just any locksmith, but one who knows about the split wafer symptoms and can repair the problem with no new parts or ignition replacement, which can cost $300 to $400.

A professional locksmith is able to diagnose and repair the problem in the field for half of what a mechanic costs. No need to tow the car because the problem can be solved in the field and the car keys will remain the original ones.

Cause of the "Toyota Split Wafer Ignition Problem?"

One cause of the problem is the faulty design of the ignition cylinder. Lack of a dust cover allows dust and other particles to accumulate inside the cylinder and disturb the force equilibrium between the key springs and wafers.

The second probable cause for a stuck Toyota ignition is a bad key copy or worn out key. A worn key can gradually damage the wafers and housing of the cylinder until it just gets stuck.

The third and most likely cause for ignition lock-out on a Toyota is a failure of the split wafer system. Toyota added a security feature to their locks that is basically a wafer (2 in a cylinder at positions 4 and 7) that is split in half and sits on the same cut positions in a given key. In 99% of the cases that I run into, the cause for the ignition to freeze is that after using the key for awhile, one of the split wafers overlaps another one and prevents the key from turning.

My recommendation for a potential car buyer (new or used) is to keep the lock and keys in good condition.

A lock should be lubricated one to two times per year (in Hawaii try to make it two times a year because of proximity to the ocean) and keys should be checked by a locksmith once a year for worn-out cuts that might prevent the plug from turning smoothly in the cylinder housing.

Even if you lubricate and have your keys checked, a malfunction may still occur, and when it happens, it is good to know a good, reliable locksmith to help. Just in case.

To get your locks lubricated, keys checked, or other fine locksmith services, call The Key Guy at 548-1999.
Posted by Guy Tordjman at 12:13 PM 5 comments:

http://www.fox10tv.com/dpp/only_on_fox10/daily_dot_com/retina-scan-security
For $99, you can get a portable biometric retina scanner and "password protect" apps on your computer like Gmail and Facebook. The device is the size of a business card. Apparently, your eye has 2000 points of identification, whereas a fingerprint only has 18.

A gift idea for the gadget-loving dad or grad in your life this spring? The product is yet to be released, but rumored to be coming soon!

Note to selves: the locksmith of the future won't be dealing with what we think of as 'locks' anymore!
Posted by Kimberly Loo at 12:25 PM No comments:

The Key Guy welcomes Gavin Baer, our newest Locksmith Apprentice, to the family! He will be learning the trade while assisting Master Locksmith Guy Tordjman on service calls.  Look for them together in the big green monster! Aloha, Gavin! 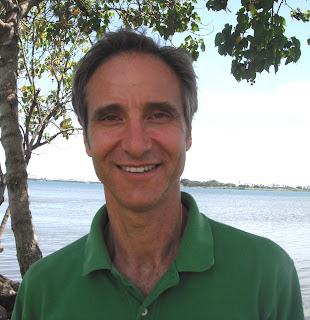 About The Key Guy

The Key Guy has a Master Locksmith on call 24 hours a day, 7 days a week. Call 1-877-7KEYGUY (377-4184 Oahu). As Hawaii’s premier Locksmith Service, we are proud to offer the most reliable, ethical, and affordable locksmithing in Hawaii - just read our testimonials! The Key Guy is kama’aina owned and operated by Certified Master Locksmiths, as well as bonded and insured.

All labor can be done right where you are, instantly. At your service are The Key Guy’s full-service mobile workshops, fully equipped with state-of-the-art machinery. The Key Guy services all types of lock hardware, including locks for vehicles, private homes, condominiums, military and commercial buildings.

We’re fast, too. We arrive on-site within 30 minutes to most Oahu locations.

The Key Guy offers an unparalleled 3-part guarantee to provide the best prices and the best service. Each individual part of our guarantee is unique among locksmiths in Hawaii. Offered ogether, they promise an unbeatable level of quality locksmithing compared to any of our competitors.

1) The Key Guy has the best prices on Oahu. Period. If you find a better price from one of our competitors, we guarantee to beat it. Proof of price must be presented before service is given.

2) Rest assured that if you call The Key Guy, we promise to find a solution for your security problem. Your problem is our problem, and we will not leave until we find a solution. We work hard for our clients, and in return, ask to keep our solid reputation.


3) In order to guarantee the most expert security solutions, The Key Guy employs Certified Master Locksmiths. Master Locksmith is the highest achievable level of locksmith certification.